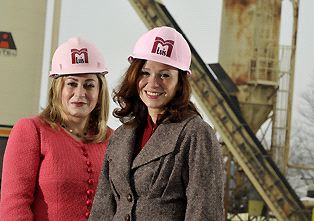 Their parents’ dream was to pave a future for their children in America. Years later, the Luis sisters continue to lay that foundation, as their road construction business restored the Silver Spring road on which they grew up.

“It took us five years to get our [citizenship documents] from Portugal,” Natalia Luis said. “When we first got here, we didn’t know anything. And here, paving the street where so many of our dreams began, that’s just superstar stuff.”

Now, Luis, 39, and her sister, Cidalia Luis, 42, plan to take those dreams for M. Luis Construction even further, with the recent acquisition of an asphalt manufacturing plant in Rockville from Lafarge North America. The acquisition could lead to as many as 100 new hires in the next six months; the company already has hired 17 for the new plant. According to a company statement, it plans to invest $5 million in employee costs in the first year.

M. Luis has about 250 employees, with most working at the main operations hub in Laurel, although the corporate headquarters are in Baltimore. The company also has an office in Clinton.

“What’s important for us is that this hasn’t been a smooth ride; it’s been uphill and bumpy. But through hard work and perseverance, success really is the only option. We’re proof,” Cidalia Luis said.

“This is a very, very shrewd move. Controlling your own manufacturing facility keeps costs down, helps you be competitive and lets you expand,” said Michael C. Henderson, president of the Baltimore metro chapter of Associated Builders and Contractors.

He described the Luis sisters as two of the most dynamic business leaders he ever has come across.

“What I really love about these ladies is how they are committed not only to being a great business, but they really care about their people,” Henderson said.

The Luis sisters received the Latina PowerHouse award at the Maryland Hispanic Business Conference this fall.

At that conference, the sisters were inviting small and minority-owned businesses to seek them out for subcontracting work and working to inspire more women to take on leadership roles, said Veronica Cool, chairwoman of the conference and a vice president with Wachovia Bank.

“Any opportunity they have to celebrate and pull people into the industry, they do,” Cool said. “You’ve got these two fly women in their designer outfits and high-heel shoes and they know their business inside and out, and we love them for it.”

The sisters and their parents emigrated from Portugal to Kensington in 1979 to fulfill the parents’ dream of being the first in their village to attend college. They fulfilled that dream, graduating from the University of Maryland, College Park.

In the meantime, their parents started M. Luis in 1985, laying a strong groundwork for their daughters’ career after the sisters returned from college and graduate school.

“We really wanted to become role models. This is an industry where women face huge challenges in terms of acceptance and other barriers,” Natalia Luis aid.

“We want not to be regarded as the secretaries in the room. Still, to this day, we go places where people look at us like we’re second-class citizens,” Cidalia Luis said.

The sisters, now residents of Washington, D.C., emphasized the struggles they have endured on the path to success, saying they chose this industry, not the other way around.

“We’ve become part of the industry’s fabric … It’s difficult, but the rewards are incredible. We really feel like we’re making a difference,” Natalia Luis said. “Our philosophy is to give as much subcontracting as possible” to other minority business enterprises.

Of the state’s 7,842 miles of roadway eligible for federal aid, 33.6 percent are rated “not acceptable” and need major repairs or replacement, according to the American Road & Transportation Builders Association. Maryland transportation construction businesses contribute about $238.1 million in state and federal payroll tax revenues and employ 30,936 full-time workers.

“The consensus from most is [that] toward the fourth quarter, the industry should be on more solid footing. We’re still flat right now,” Henderson said. “We still benefit from [federal] stimulus spending, but that’s coming to an end soon. None of this is simple.”

Although M. Luis also was hit hard by the Great Recession, the company was able to hire back all of the 30 employees it laid off.

The sisters said they expect the new asphalt plant to take the company to the next tier of work, as it tries to expand within the manufacturing branch.

For Cidalia Luis, who also is a cancer survivor, the company’s success is just another in a series of miracles for which the sisters are thankful. “This isn’t a new chapter; this is a new volume,” Natalia Luis said.