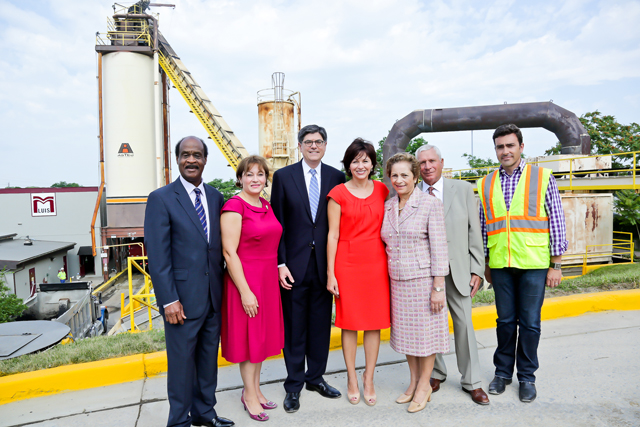 Secretary Lew chose M. Luis, an asphalt and construction services company, to emphasize the critical contributions of entrepreneurs and immigrants. The Luis family immigrated to the United States in 1979 and founded a road construction business with little more than a pickup truck. The business now employs over 200 people and generates $60 million in annual revenues.

“We are a nation of immigrants. We’re a nation where entrepreneurship has come from people coming to our shores, having an opportunity and building a life for themselves, their families and their communities. … Twenty-five percent of the small businesses in America are started by immigrants and 25 percent of the high technology firms. That’s what our future growth is all about,” Secretary Lew said.

“We’re proud of the company’s accomplishments and honored to have Secretary Lew visit. It shows the importance of industry-government partnerships and the exponential impact that loan programs can have,” said Cidalia Luis-Akbar, M. Luis owner and president.

Since purchasing the Rockville asphalt plant in 2010, the company has been on a steady growth trajectory, now offering quality products and services through three core divisions: Asphalt & Aggregate Manufacturing, Construction Services and the newly-launched Hydrovac Excavation.

“As the economy continues to recover, we expect to continue to invest in job growth and infrastructure in our region,” said Natalia Luis, M. Luis owner and vice president.

Later this year M. Luis will be expanding again, launching a Quality Control Testing Services division. They have a proven testing track record – in 2010 they became the only company to offer a state-certified mobile asphalt testing unit in Maryland.

Congressman Chris Van Hollen, who has been a leader on small business issues in the U.S. House of Representatives, said: “M. Luis Construction’s manufacturing facility is an embodiment of the hard work and risk taking we see every day from small business owners across the country. As we celebrate National Small Business Week, I join with Secretary Lew in encouraging all Americans to consider the role that entrepreneurs, no matter where they come from, play in moving our economy forward.”