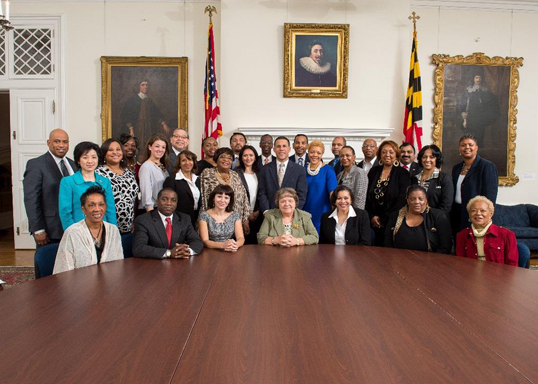 “Maryland has earned a national reputation as a leader in minority inclusion because our strength stems from our diversity,” said Lt. Governor Brown. “Our program is constantly evolving and input from the business community can help us remove barriers that inhibit equal access within the State contracting arena.”

Twenty-six business owners and advocates engaged in the discussion which covered topics such as prompt payment to subcontractors, the unbundling of large contracts to create more prime contracting opportunities, compliance and enforcement of existing procurement regulations and access to capital.

Special Secretary Zenita Wickham Hurley of the Governor’s Office of Minority Affairs (GOMA) highlighted two of the O’Malley-Brown Administration’s newest initiatives targeting small and minority-owned businesses. The first helps potential bidders identify which agencies buy what they sell by providing forecasting reports on GOMA’s website for agency-specific solicitations expected to exceed $100,000. The second requires GOMA to review the minority participation goals placed on statewide master contracts and contracts over $25 million and is designed to ensure that all MBE opportunities are being identified at the onset of the procurement process.

“This has always been a very engaged group of stakeholders,” commented Secretary Hurley. “We heard some great ideas and learned that we need to engage the minority business community with more frequency.”