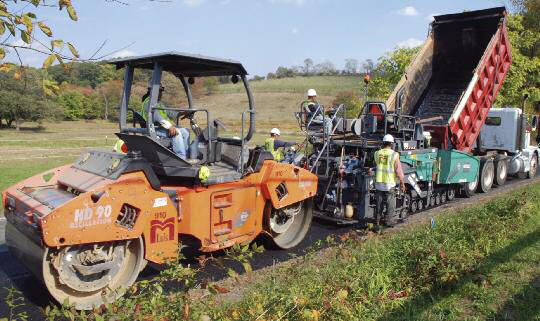 In the more than 25 years since its launch in 1985, sick M. Luis Construction Co., troche Inc., has expanded aggressively from a one-crew concrete contractor, to providing road construction services throughout Maryland. These services include asphalt and concrete paving, cold milling, maintenance programs and streetscapes.

That the firm thinks innovatively is underscored by the fact that in 2010, M. Luis became the only road construction company in the state of Maryland to create a State Highway Administration approved portable asphalt testing lab, housed in a van.

The firm was founded as a one-crew concrete contractor by Albertina Luis and her husband Manuel. After years of expansion, in 2008, they sold the company to their two daughters, who serve as executive management.

Getting to the 25th anniversary of the business in October was a real milestone, said Cidalia Luis-Akbar, president, M. Luis.

“Mom always was a business-minded entrepreneur 10  in every sense of the word, and Dad always has been the artisan,” Luis-Akbar said. “We were never pushed into the business. It was our choice. We studied what we wanted to study. But after we had gone out and experienced the world, we came back of our own choice, which was really key to our success. We made a go of it and now are passionate about our industry and in making a difference, and in becoming mentors to the next generation of young women who really want to get into construction.”

Success now comes externally from winning bids, and internally from self-examination of how business is conducted.

“Maintaining our growth has been challenging,” said Natalia Luis, vice president. “Change is hard. Every time we go into the winter we take a hard look at our company, at what we’ve done well and not done well. We get rid of what we’re not good at, and do better at what we’re good at. We have an established level of risk tolerance, but we’ve found that we thrive just outside of our comfort zones, and that has kept us energetic and enthusiastic, and enabled us to keep our eyes on the ball.”

When visited in October, M. Luis had multiple milling and paving jobs underway in and around Baltimore, Washington D.C., and surrounding Maryland counties, all using Wirtgen Group equipment.

While the concentration of government activity has kept the region somewhat insulated from the recession, working conditions can be difficult, with very heavy traffic, delays in truck delivery of asphalt and turn-arounds, and limited work hours.

In particular, the Washington D.C. suburbs are laced with winding two-lane blacktop roads which connect one suburb or subdivision with another. While the roads are attractive as they twist their way through woods and fields, every day they very rapidly fill up with traffic, and can be backed up for miles, bumper-to-bumper, at rush hour.

“We have four supervisors directly involved with milling and paving operations,” said Tony Monteiro, field manager, M. Luis. “All of our work is urban or suburban with very high traffic volumes all day long. Haul trucks often are stuck in traffic. We are limited to working 9 a.m. to 3 p.m. on many jobs, and as we don’t own our own asphalt plant, it can be hard to control the entire operation.”

“All of our 11 asphalt rollers are Hamm products,” Monteiro said. “We use Oscillation compaction; it helps us achieve density a lot faster than with regular rollers. It definitely helps us with Superpave and its tender zone. And if a mix cools down too much, we still can get the numbers that we need with Oscillation compaction.”

Moreover, M. Luis still does portland cement concrete work. “We have 15 concrete crews,” Monteiro said. “We do everything associated with the roadway; curbs, sidewalks, concrete storm drains, and drainage paving.”

“We’ve tried many other brands, but seven years ago we rented a Vögele America paver, as it was the only one available,” Monteiro said. “I was amazed at what the paver could do, even with it being a very old model. It automated many of the tasks we had to do manually. The configuration of the controls, the whole set-up of the machine, made operation much easier with the Vögele paver. After that, as we began buying more product, we bought all Wirtgen equipment, like our two Vögele America 2116Ts, which we are still using.

“Things have improved even more since then,” Monteiro said. “From there we went to the Vision pavers. Our three Vision 5200-2 models are amazing. We have a fourth and fifth Vision paver on rental, for a total of seven Vögele pavers in use this summer. Everybody in the company loves them. The software is improved and the slope controls are outstanding.”

In addition to the Vögele pavers, M. Luis has 11 Hamm rollers: five HD 90s, and five HD 120s, some with Oscillation, and some without, and has just acquired an HD 75. They complement its six Wirtgen milling machines: a W 1900, bought four years ago; four W 2000s; and now a new W 210 purchased this year.

“The Wirtgen mills don’t break,” Monteiro said. “They do a good job. The new W 210 incorporates a lot of changes. It’s a bit smaller and that helps as our type of work takes place in the city on narrow rights-of-way. It’s also easier to maneuver and the operator’s point of view is much improved over the W 2000.”

On Avery Road in Montgomery County, M. Luis was rehabilitating the road by milling, doing base repairs, and following with paving a 2-in. overlay. For base repairs, M. Luis mills up to 6 in. down, and fills with 19mm or 25mm NMAS mix, depending on the contract. There, a W 2000 was milling with its 6-ft., 7-in. drum.

“The main reason for the mobile lab is to get a quick answer on the density of the roadway,” said Mark Wray, lab manager. “We run a maximum specific gravity on the mixture, and when a core is compared to that, we get the density. Where it would take 24 hours to get that using a consulting testing lab, we can get it in 10 minutes.”

The lab work is done in addition to use of nondestructive means such as nuclear density gauges. “We use nuclear density gauges too, but they are not as accurate as the cores,” Wray said. “When I’m out on the road, I let the nuclear gauges compare to my results, which are very accurate. That way the gauges can be better calibrated to the cores.”

It’s a big leap from the shady lanes of suburban Maryland to the row houses of inner city Baltimore, but it’s one that M. Luis makes all the time.

There, on Wilkens Ave., M. Luis was using its first and oldest mill, a W 1900, to remove 2-in. asphalt pavement in advance of base repairs and 2-in. of paving. It’s the last phase of a curb-and-gutter streetscape project involving an attractive concrete median, and more. The $2.5 million job is part of the American Recovery and Reinvestment Act.

“The W 1900 is a smaller machine, which is easier to maneuver in tight urban quarters,” Monteiro said. M. Luis will replace with 6,000 tons of 12.5mm NMAS mix with PG 64-22 performance-graded binder, using about 20 percent RAP.

“The W 1900 is our first baby,” he added. “We have up to 7,500 hours on it, acquired about five years ago. It still operates in perfect condition. We follow the factory recommendations exactly, replace what has to be replaced, and it has served us well.”